Docs for installation of system in a localhost environment for pro users.

1) Unzip the file to any folder on you desktop 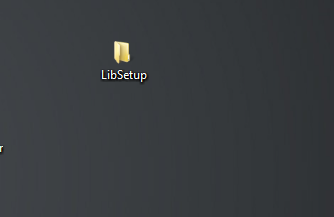 2) Then start your wamp/xaamp and create a DB and import the dummy.sql file which you can find under storage folder

3) Check if you have php 7.3 or above in your system by typing this in your CMD or Terminal   php -v . if you don't have it kindly google to install it for you respective wamp/xamp etc server.

4) Then type the following command by moving inside that folder like show below i had extracted inside test/Libsetup so cd test\Libsetup and then type php artisan serve Then open the shown link http://127.0.0.1:8000 . Note you got to change the APP_URL to this ip address inside the .env file and setup other db setting as well.

If you are unable to follow all the above procedure or you are a non-technical person there is a portable version as well for all our users. Even devs who want to get started immediately can download and do their editing on portable version.

What is this portable version? It's basically a portable server like the xaamp/waamp that you have in your system.It neither effects your xaamp/waamp setting nor your existing dbs. It has his own www folder and PHPadmin. So you just start it and it will act like xaamp/waamp. In its www folder just like xaamp/waamp there is a sub folder called library which has source code in them.Why is this portable version supplied? For basic user they can just extract the file and install few support files provide inside it and they are good to go. While for pro user who mostly probably would already be having xaamp/waamp .Most of the xaamp/waamp are running either old PHP version or Old my sql version. So changing you xaamp/waamp setting for this project could mess up ur other project since they are build on older version which is why we are supplying a portable version which doesn't effect your existing waamp/xaamp project. Phpadmin :- root is the username and MgsqQptt is the password . Open this url after starting the server http://localhost/phpmyadmin . There would be a db called library which has all the db tables for this project. So you could carry on with your modification over there.

For basic user there is nothing to be worried about any of the above things. Some screenshot of how this looks like


1) Below is the image of phpadmin. which is same as your xaamp/waamp . This is a latest version of phpadmin and mysql which xamp/waamp are not providing at the movement.

2) Below is the image of main panel when u click on laragon.exe , Just like xaamp/waamp has multiple Start Button this doesn't has one. Single Start All will start both php and mysqldb together. The www folder has source code [www/library] same concept like waamp/xaamp here 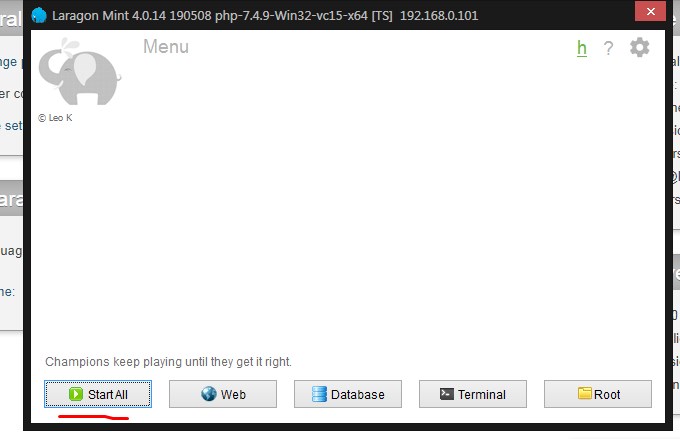 3) Click on the reload button here. Don't forget this step. This basically add a small setting in your host file which is why typing http://library.test opens the following project. Which is not the case with xaamp/waamp as the project there would be openend via something of http://localhost/something. This we can say makes a good url for your locally hosted project which you can remember easily. If you like to change the url say from library.test to lib.test or anything you like , just rename the library folder to the url name you require say: i want to change library.test to lib.test then i will rename the library folder to lib then press reload button so it creates a new url for us. And don't forget to change the .env file APP_URL now it would be in this case become APP_URL=http://lib.test 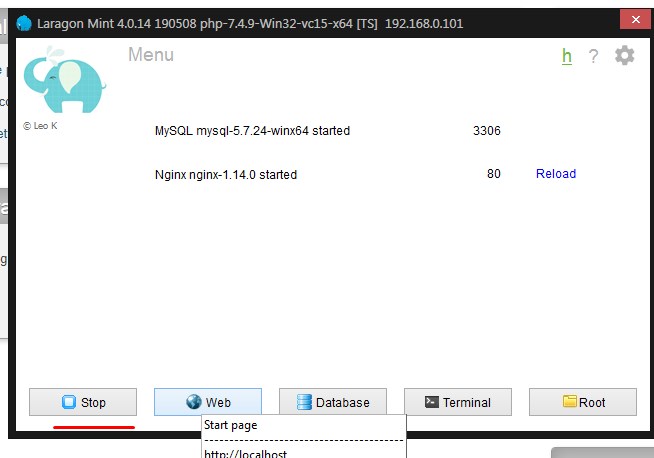 4) Below is the image of lms source code folder which is basically inside www/library .The env file is already connected to this phpadmin so nothing needs to be modified here. You can direclty use the website after start all button was clicked. By opening the link http://library.test 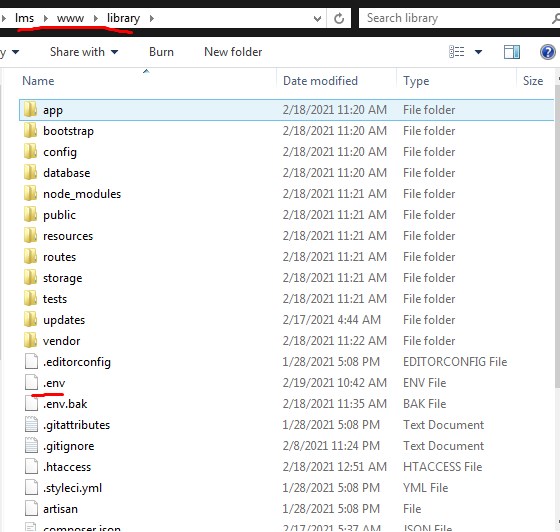 Complete installation of the portable version is given below. Follow these steps.

Note these will only work on Windows

Sometime the code will be few version outdated. How do you check?

You can open the file called version.txt in the folder www/library and see if its same as show in the demo site dashboard page [below].If it's different you can paste the downloaded source code into the www/library folder but don't overrite the .env file present in the www/library directory

First thing is if you running any xaamp/wamp or any such server kindly turn it off and exit them.

Then install all the files inside the install_me_sir folder. [These files are nothing but microsoft .net files u can leave it in your system
,no need to uninstall these]. After all the installation of support files are done Then follow the below
procedure.

// Kindly click on allow on every notication that pops up . It basically setups ur computers.

// Note nothing gets installed in ur system.

// And this is a portable version you can carry the extracted folder in ur pendrive and all the data & settings will be carried along.

// You just have to follow the same procedure to run the LMS system again.

4) Then open link http://library.test/ in your browser

Note: All the source code is inside the folder www/library/

// After all the necessary changes are made to the source code, you can zip the source code which is files inside here library/ and upload it to your server and don't forget to change the .env setting as per your server db details. Most people forget this. Also note before zipping the file to be uploaded delete all the file from the folder www/library/bootstrap\cache\ as after few usage cache files get collected inside these folders